Checking out the state of the unpaved.

It being a stinking, sweltering hot day today I chose to ramble about on the dirt roads to the southeast of the city and see how they’re doing.

As you can see, for the most part they’re doing good. And so, in that way that suggests I’m still 15 somewhere deep inside, a relaxed ramble became a high-cardio gravel sweatfest. 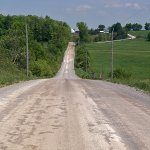 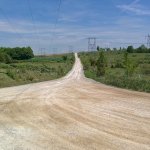 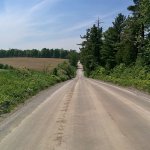 And then there’s Settlers Line.

For 3 years I’ve been waiting for Settlers to be even marginally good. It taunts me with it’s serious hills and promises of grand views. I got as far south as the Trans-Canada-Trail one time, over 2 of the 3 drumlins, before things got so bad that I had to bail onto the trail just before the monstrous last hill of the group.

This year the surface sucked as badly as ever, but I decided that at this point its never going to be good and if I want to do it, then I have to take it as I find it.

Even with plush 700x32 Compass tires it was a trying time over the first climbs. It was sketchy right up to the bottom of the last climb where the dirt became inexplicably smooth. The road crew had given up/gone for lunch never to return/died right at the bottom, leaving the beast climbable. And climbed it was. Still feeling that one...